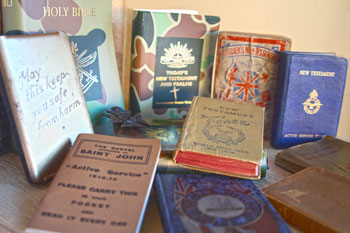 There were over 40 million Bibles, Testaments and prayer books distributed by the British and Foreign Bible Society in World War One!  Many would have remained unread, or thrown away, sent home as souvenirs or destroyed in battle.  However the Bible rapidly became the most read book in the trenches and it provided comfort, inspiration, strength and hope to vast numbers of British Commonwealth (including Australian and NZ soldiers), German and Russian soldiers, and their families at home.

William Ewing, a minister at Gallipoli and in Mesopotamia, wrote:
"In hospital it was a common thing to see a lad on his stretcher, quite unobtrusively, but with evident appreciation, reading his New Testament. I handled a great number of these books, and found them not, as a rule, simply dog-eared from carrying in the pocket, but well thumbed, which sufficiently testified to the use made of them."

Most military Bibles and Testaments are small - the smaller the better, with many printed on India paper to keep them lightweight and suitable for carrying in pockets and knapsacks.

In certain cases, scripture could even become a source of comfort which united soldiers on active service with their relatives at home. At the height of the battle of the Somme, for example, E.G. Routley, a subaltern in the 6th East Kents, wrote to his mother:

"I came across a Bible in the trenches and opened it at random and turned to the 23rd Psalm, & I want you to read it whenever you feel depressed. I am always thinking of that lovely verse ('Yea though I walk through the valley of the shadow of death I will fear no evil') whenever I am given any dangerous job." 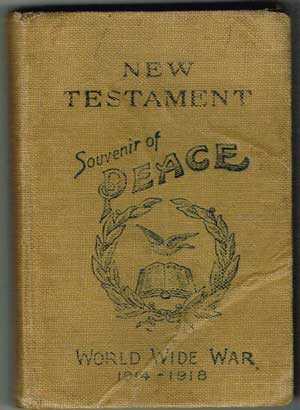 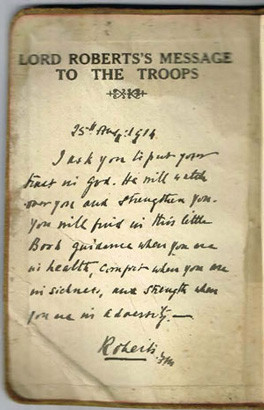 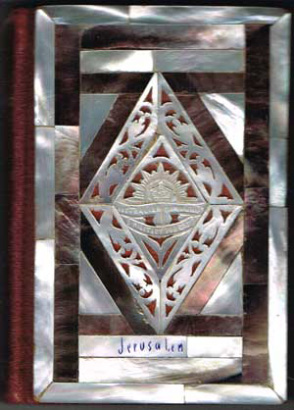 This short video is from the British and Foreign Bible Society and is primarily about British Soldiers, but it also applies to Australians.