Ellen and Jean have been raising Red Spotted Jezebels every spring since 2012.  Here is the story of how it all started.

The Bible Museum Garden was visited by a Red Spotted Jezebel Butterfly (Delias aganippe) in early October 2012. She and the other butterflies in their flock were at the end of their migratory flight from northern Victoria and the Flinders Ranges in SA.  However, they laid their eggs on the wrong plant (olive and loquat trees) around St Arnaud. Their caterpillars only eat parasitic plants, such as Quandong and Sandalwood. Having spotted that there were hundreds of eggs on the wrong plants we decided to rescue them from certain death and rear them on the correct plants and release them back into the wild.  We gave them two different types of mistletoe leaves and cherry ballart, but wouldn't eat any of it and were dying.  In desperation we rang Macca on the ABC to appeal for Quandong, see ABC's 'Macca' Australia All Over blog, and to our great relief some was located and the little caterpillars thrived on it.

And yes, Jezebel was the really 'bad girl' of the Bible, wife of King Ahab of Israel.
Some people know this butterfly (Delias aganippe) by a different common name, the 'Wood White'. Dr Michael Braby (author of the 2 vol 'Butterflies of Australia' book), one of Australia's leading butterfly experts, says it is more appropriate to call them by the name 'Jezebel', as this is the common name by which all other butterflies in the Delias group are commonly known.
Update December 2017: This year has been our most successful in rearing the Jezebel butterflies, with over 1,500 released in early December 2017. They very quickly left the St Arnaud area and we assume they are migrating once again to their summer home at Rye, on the Mornington Peninsula. We expect to see them back in the area in Autumn, around May 2018. More photos and videos of the butterflies can be viewed on our facebook page, http://www.facebook.com/biblemuseumaustralia
Update September 2015: Once again, the Jezebels have flown to St Arnaud and laid their eggs on the wrong trees.  We have collected several hundred eggs on loquat and olive trees.  When we visited a farm up near Donald, there were several hundred eggs on olive trees, right next to an paddock full of quandongs!  After examining the quandongs we discovered some overwintering caterpillars and pupae, so having rescued them from the meat ants which were eating them, we have them on display here at the Bible Museum.  The pupae should be hatching into butterflies around mid-late September, so we will keep a small number of live butterflies in our butterfly enclosure.  The eggs, caterpillars, pupae and butterflies can all be viewed by the general public.  See our visiting page for more info.
Hatching of a male butterfly:
2012 *update - 14th November: The Jezebel caterpillars have been devouring the Quandong for several weeks and are now pupating into chrysalis, ready to turn into butterflies in 2 or 3 weeks time. So far we have over 100 pupae/chyrsalis, with several hundred still to pupate.
*update - 19th November: Over 200 pupae now, still no hatchings. We think the first butterfly will hatch in around a week's time.
*update - 21st November: We've just done a fairly accurate count of the pupae and there are over 400 pupae or pupating caterpillars at present! Still quite a few caterpillars still eating Quandong, but it's rather hard to count them.
*update - 26th November: Hatching started today! 10 butterflies out so far. Lots of photos - scroll to the bottom of the page to see them.
*update - 28th November: around 40 butterflies were released today! No butterflies will be released on Thursday 29th November, due to the very hot weather. They will be kept inside & released on Friday.

*update - 4th December: Almost all of the butterflies have hatched and been released now. At the DSE's suggestion we took some of them down to the bush where we had found there was wild Quandong growing, and released some couples there. They sat around on the Quandong and seemed quite happy. There are about 50 pupae left, so if you want to see them, you need come in the next couple of days. We've been checking the Olive trees and Quandong regularly for butterfly eggs, but nothing yet. There are quite a few Jezebel butterflies floating around our garden, although the males do tend to stay up high, as they are typical 'tree toppers'.

*update - 9th December: Only a couple of Jezebel pupa's left now. The remaining butterflies will be released today and tomorrow. We are still checking the Olive and Quandong trees for eggs as there are still some Jezebel's flying around the tops of the trees here. There was a lot of strong wind yesterday, so they may have been blown across Victoria. A Wanderer or Monarch butterfly was laying eggs in our garden yesterday, so we should have their caterpillars soon. They should start hatching in January.

*update - 9th December: Just one pupa left! Some Jezebel butterflies still to be seen at the top of the trees in the garden. We think the majority have moved on out of the area. Lots of other butterflies, including Monarchs, are nectaring in the garden.

Note: all images are copyright to Ellen & Jean Reid and you need our permission to copy or redistribute them.
The photos below are of 'mother butterfly', the Red Spotted Jezebel butterfly which laid her eggs on our Olive tree. 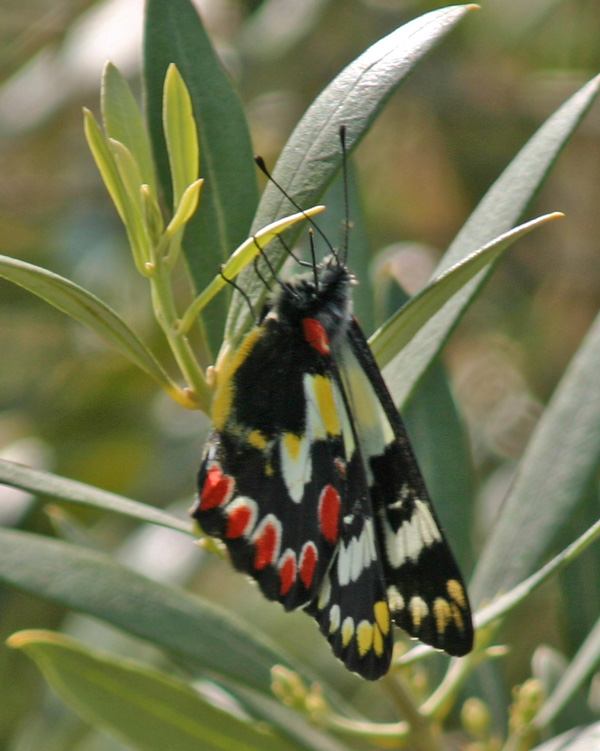 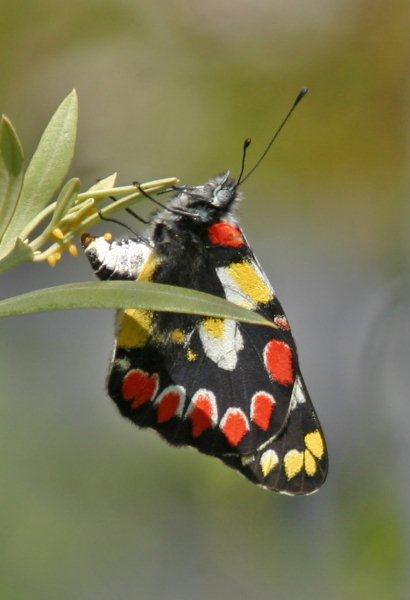 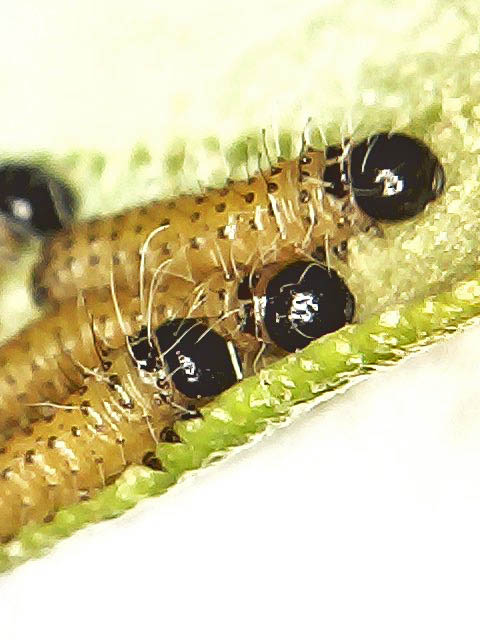 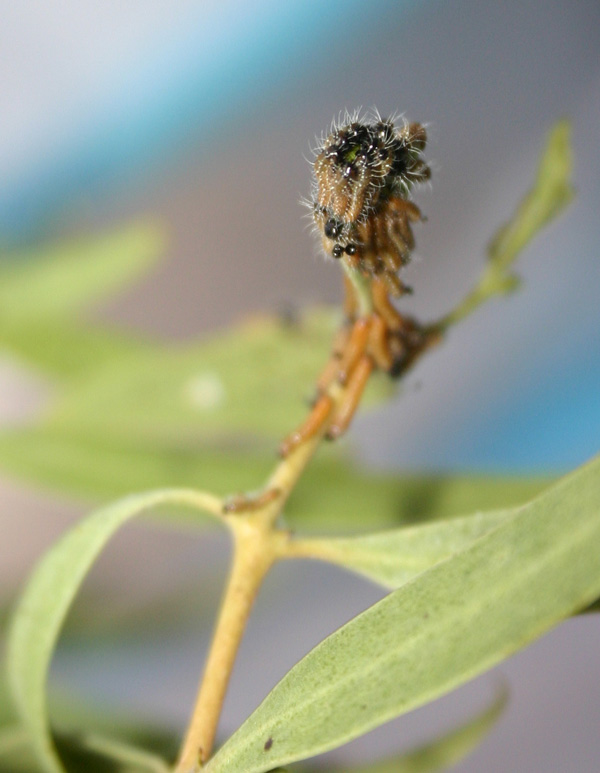 More Jezebel Caterpillars, the caterpillar on the right is now around 3.5cm long. They are 'gregarious' which means they like to eat and sleep together. They also tend to pupate together. We even had an problem where a group tried to drown together, when they headed single file down the opening of a bottle which was holding the Quandong stems. A mass disaster was narrowly averted when we caught them, but sadly we lost about 6 in this incident. It was rather like a 'whale beaching' where they followed the leader to a suicidal death. This particular group was searching for somewhere to pupate and had become confused. We now cover all bottles/jar openings with alfoil. Incidentally, all our caterpillars are kept in parasite proof breeding enclosures, sold here.  The caterpillars are affected by a parasitic wasp which kills them if they are left out in the wild. 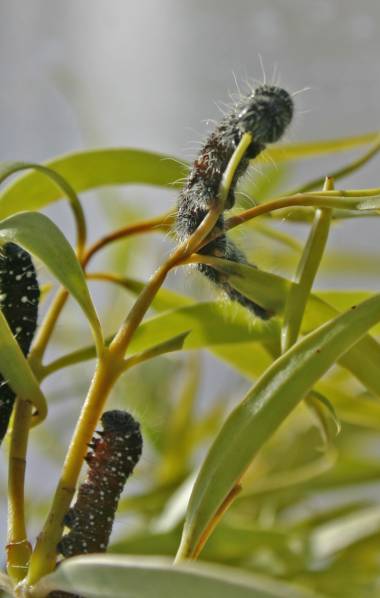 Jezebel Caterpillar pupating (shedding its skin or more correctly exoskeleton). You can just make out the tiny wings in the third picture, which will be inflated after it hatches. Click on the image for a high defn close-up pic. 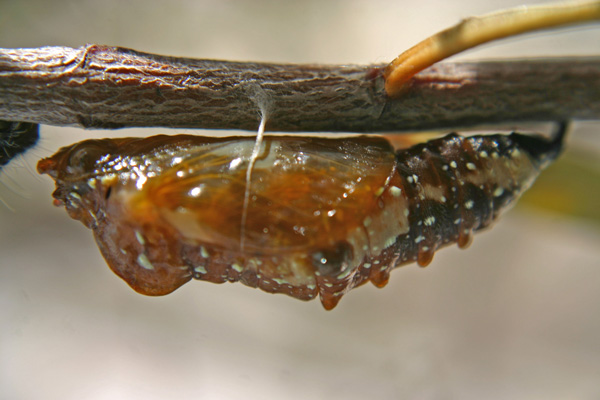 The photograph below was taken of a pupating Jezebel caterpillar at night, where you can see the contrast between the body, wings and head/probocis. The furry black bit on the left is the shed skin. Click on the photo for a high defn image.

The following video is of a pupation (caterpillar turning into a pupa).
The first butterflies started hatching (or 'eclosing') today, 26th November, as below 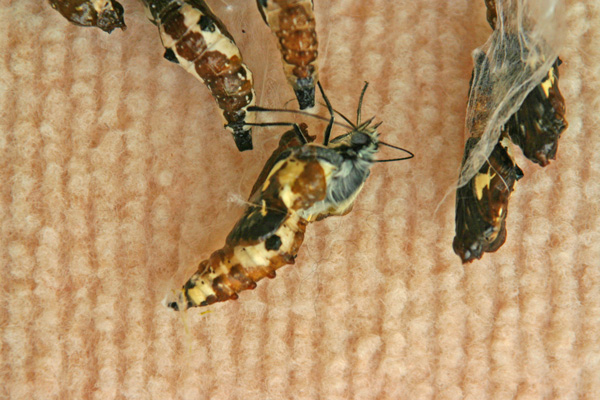 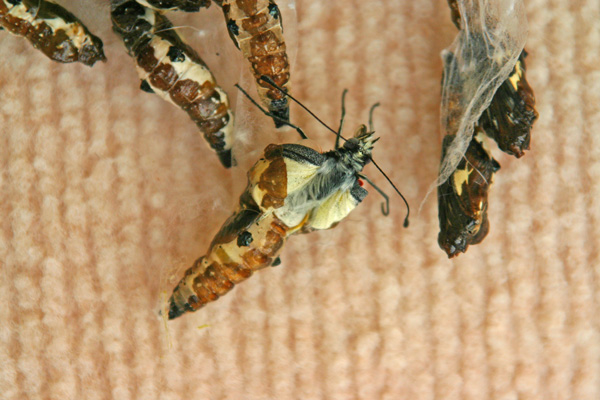 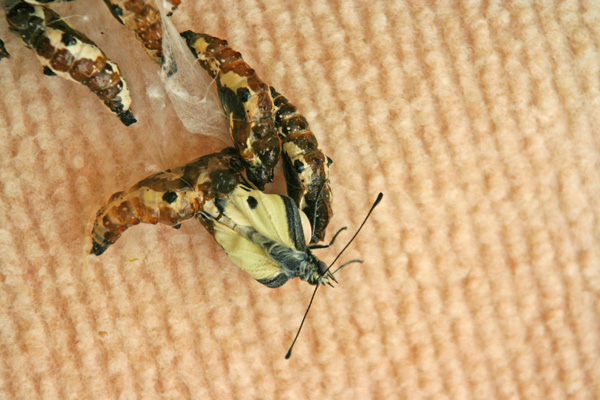 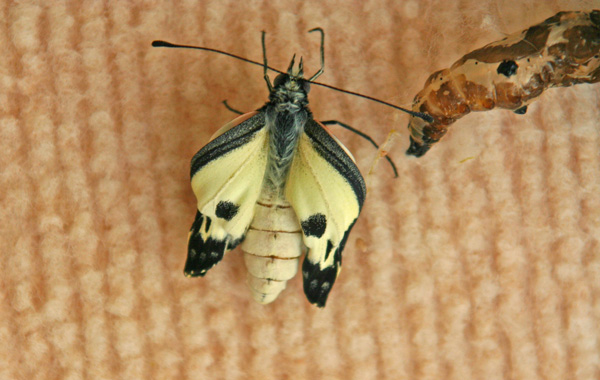 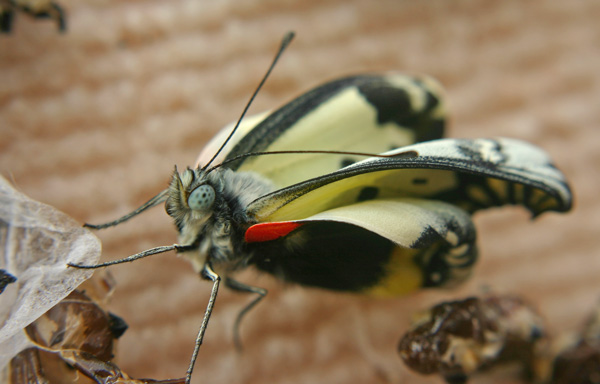 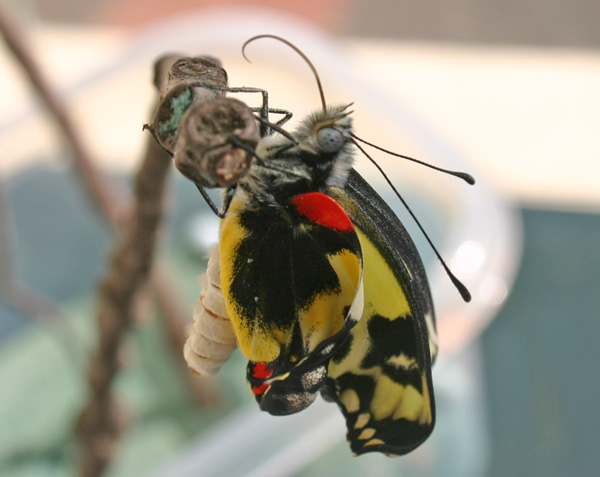 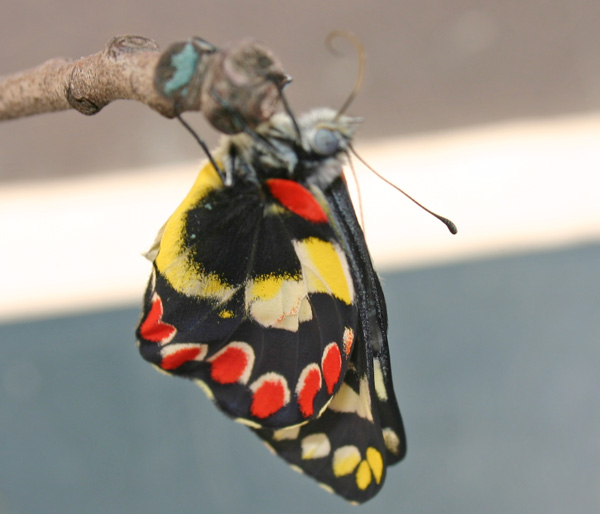 Photo of butterflies taken through the front window (they are inside). 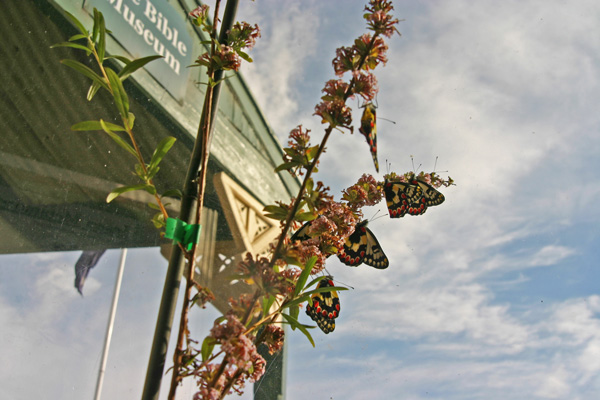 Maiden Flight, out in the back garden (click for high defn): 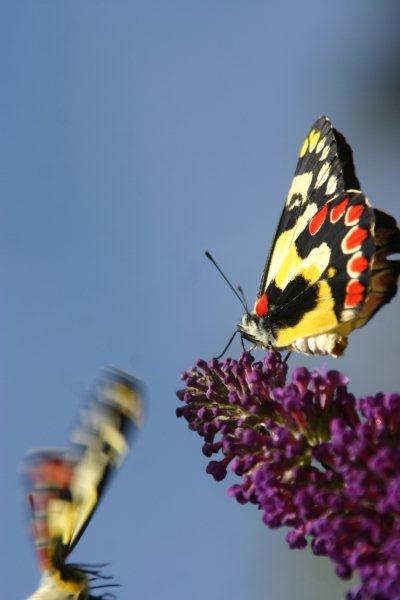 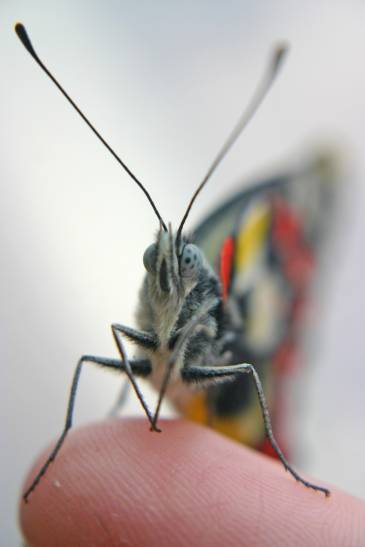